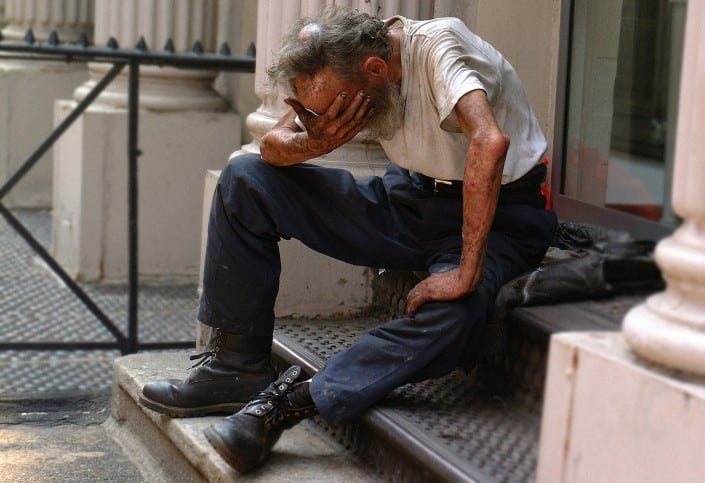 Photo by Ben Hershey on Unsplash

Have you ever wondered: why do I have bad luck with everything? Have you ever found yourself to the point of exasperation or beyond, because no matter how hard you try, you just can’t seem to be getting rid of bad luck?

It is true that some people seem to attract a series of unfortunate events in their lives, while others seem to have everything always working out of them. This is not the result of some curse, genetic inheritance of bad fortune, or of being disliked by a deity. It all results from the negative psychology of luck, that is, a belief that bad things keep happening to us, which in turn manifests into our physical reality.

A series of unfortunate events... and some fortunate glitches

A couple of weeks ago I found myself abroad, in a remote village far from civilization. The place I was staying at had no central heating,, really bad food, and living there was just uncomfortable and unhealthy. I didn’t immediately make arrangements to leave because I was worried about money.

At the same time, it was almost as if I instantly forgot all my knowledge and practice about manifesting. It felt as if Neville Goddard had no signal in that village! It was a “manifesting-free” zone. That, of course, wasn’t true. We are always creating based on our thoughts, ideas, and beliefs. I was manifesting, but I had been so taken aback by the bad living conditions I experienced, and was so disappointed by my own powers, facing “a glitch” in the system of always manifesting good things, that I just gave up and wallowed in self-pity.

The series of manifestations that followed was a hilarious mix of extremely negative and miraculously positive events – 100% mirroring my turbulent, wishy-washy thoughts. Instead of remembering that I had a choice in creating my reality, I fell into victim mode and stayed in bed, calling everyone back home, crying about the horrible conditions and affirming that I would get sick. Eventually, I realized I could do something to get myself out of there without paying for it.

Well, guess what happened. In no more than an hour I had an emergency-room-high fever, something which hadn’t happened to me in over a decade. I got stuck in that place feeling miserable, but due to my sickness, I ended up with a reason to leave. I worried that I wouldn’t get enough emotional support from someone back home who was important to me, and sure enough, I didn’t!

I suffered for another day, burning up, missing out on all the fun the others were having, incapable of even using the bathroom because of the freezing temperature of the building, and eventually, I left. During my trip I lost my phone charger and missed my train, resulting in me having to pay for another ridiculously expensive ticket as no cancellations or changes applied to that fare.

Sure, it was a horrible couple of days. Nevertheless, the moment I found myself at the train station, away from that gloomy environment, I got the clarity I had been missing. I asked myself: How can I change my bad luck into good luck? I calmly took out my manifesting journal and set my intentions.

See yourself living in abundance and you will attract it.

For starters, I decided I wanted miraculous, mind-blowing healing, and an Airbnb landlady who wouldn’t mind my consumptive-sounding, germ-filled cough.

Sure enough, that same evening I was already fever-free and didn’t feel ill again, despite being warned at the hospital that this flu usually takes over a week to fully heal. I still did fear coughing while staying in someone else’s apartment,  though, and I almost hacked up a lung the minute I went to bed. The landlady was super sweet and prepared me hot milk with honey. I then affirmed that the cough was gone. I didn’t cough again through the night, or for the weeks that followed. Simple as that. No need to script or visualize. Just a change of mindset, instantaneously achieved with the help of a small shock.

I have noticed that my dad, usually an accepting and positive person, has always joked about being ridiculously unlucky. And it is true! He’d get days when the most unbelievable inconveniences would occur to him, one after the other.

Many people grow up believing that good things don’t happen to them. For years I used to believe that if I got incredibly good things in one area of my life they would either not last or bring chaos in another area, in order for an imaginary balance to be maintained. I always used to think of worst-case scenarios, and very often they happened! I reached a point where I believed that I could predict bad events. In fact, I couldn’t predict them; I created them! The conviction that it was impossible to simply have good things would cause me to always chase happiness and trying to fill in holes from which I feared it would leak.

So many of us have been conditioned to operate in victim mode. We think that good or bad things simply happen to us. We were brought up in a society that teaches us that good relationships/success/money always require you to struggle.

The truth, though, is that we create our experiences based on conscious thoughts or subconscious beliefs. We can recondition ourselves to get rid of our limiting beliefs and replace them with new ones that serve us.

So, if you find yourself asking: how can I attract good luck? The answer is: focus on it. Assume that you already have it. Decide that it’s yours and that you always attract good things. Even if you are disbelieving at first, through proper focus good things will start appearing in your 3D experience, and then the possession of good luck will become a belief deeply ingrained in you.

Ask yourself: what are my limiting beliefs? Observe your thoughts and the way things unfold in your reality. Take your time to identify your blocks, and then start affirming their opposite.

Envision the future you desire. Create the life of your dreams. See it, feel it, believe it.

You can write down your own personalized affirmations and repeat them to yourselves until you feel their truth. Some of my favorite affirmations are:

Sometimes changing your thoughts may seem impossible, especially when you’re stuck in a lifestyle that doesn’t allow you to feel in alignment with your dreams. You won’t be able to focus on positive thoughts and reverse your beliefs if you stay at home all day, if you don’t take proper care of yourself, or if you hang out with people who fill you with negativity.

In  certain situations it is necessary to first change your surroundings, your routine, or the people around you, in order to redefine your life and be able to actively pursue your goals. There are things that hold us back from realizing our dreams by keeping our mood low and not letting us reach our full potential in life.

The thing that helped me refocus from the situation I was in towards what I desired, was simply getting from the hostel to the train station. Sometimes a place, a person or a habit keeps us chained to our old self until we let them go. That doesn’t mean you need to spend money or to go on vacation or quit your job first thing tomorrow morning. Just make an effort to get out of bed, to shower, to take a walk to a park you haven’t visited before. Call someone you haven’t seen in months and arrange a coffee with them. It’s amazing how much clarity change can bring us.

When you’ve been stuck in an unpleasant situation for a very long time, it becomes your second nature and it is difficult to overturn it. If you feel like you’re stuck in a rut, give yourself time. Applying pressure to yourself to shift your focus overnight isn’t just ineffective; it will also make you feel even worse.

Can a person bring bad luck to you? Yes, but not in some mystical, obscure way. It’s not like carrying some garlic around will protect you from transmittable bad luck.

Some people tend to focus on the negative rather than the positive. Many of us have been that person. That person could also have been you up until now.

However, if you are in the process of changing your focus and prioritizing positivity, hanging out with people who keep draining your energy isn’t ideal. That doesn’t mean that you need to cut ties with your loved ones. It just means that you need to develop stronger boundaries so that you don’t get affected by the negativity of others.

It is important to learn to say no. “No, I can’t hang out today. No, I can’t help you if you don’t help yourself. No, I won’t follow your dream, I’ll follow mine instead.”

You might find yourself trapped in a job that you don’t like because people think it’s prestigious, or studying something that you hate because it makes your parents happy. You may be aligned to the wrong frequency because you’re living a life that doesn’t represent you.

Change is scary but necessary. Stop lying to yourself about your priorities and desires. Identify your blocks and rewrite the script. Start focusing on what you love and you will notice that positive things will start to flood your life!

Most importantly, be gentle with yourself. Change rarely happens overnight, and relapses are okay. Don’t try to suppress your negative feelings because they will eventually resurface and demand your attention. You need to feel all the feelings, accept them and let them take their course. Embrace mistakes and learn from them. If you are suffering from mental health issues it is often crucial that you ask for professional help and not try to navigate those complex feelings on your own.

There are numerous ways to get out of a rut, and everyone’s journey is different. You deserve good things! The moment you realize that they will come to you!

How Do You Stop a Negative Manifestation?

Can You Still Be Grateful When Your Life Sucks?

The Mindset of Kobe Bryant